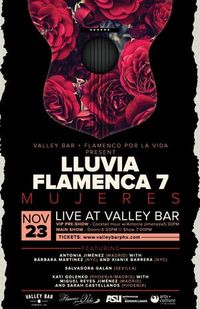 6:30 PM DOORS | 7PM SHOW | 21+ | $30 ADVANCE | $125 VIP EXPERIENCE About this Event Lluvia Flamenca returns for a one night celebration of Flamenco! In its seventh season, Lluvia Flamenca will present MUJERES, featuring three FEMALE flamenco guitarists Antonia Jiménez, Salvadora Galán and Kati Golenko and their respective companies. MUJERES is a rare and exciting evening in the male-dominated world of flamenco guitar.

Antonia Jiménez Arenas was born in 1972, Antonia Jiménez is a flamenco guitarist originally from El Puerto de Santa María, Cádiz. From a very young age, Jiménez began studying flamenco guitar with Antonia Villar, Accompanying cante and baile in tablaos and peñas in Andalucía. Later, she moved to Madrid where she worked at the most important tablaos and theatres in the capital. She joined the Arrieritos and Nuevo Ballet Español companies and at the same time furthered her studies with maestro Enrique Vargas. She accompanied cante for artists such as Carmen Linares, Montse Cortés, and Juan Pinilla among others; baile for Merche Esperalda, Marco Flores, Olga Pericet, Rocío Molina, Manuel Liñán and Belén Maya, among others, with whom she has traveled the globe.

Salvadora Galan is a singer and guitarist was born on July 9, 1943, in Olvera (Cádiz), a small town near Ronda in the mountainous region of Cádiz, but at the early age of nine, she went to live with his parents in Utrera (Seville), and for her it was very important to have lived there because of the environment in which he grew up, always surrounded by great artists. At the age of 13, she won a flamenco singing contest in Utrera (Seville). At 17, Salvadora began her professional career, traveling through Spain, Portugal, and since then she has performed at different flamenco festivals. In recent years, Salvadora Galán has traveled giving recitals and concerts in Mexico and the United States.

Kati Golenko is a Polish-American singer and flamenco guitarist, who began her musical studies with classical music at the age of seven. After hearing flamenco at a Spanish restaurant in Arizona, she embarked on her journey to become a professional flamenco musician, moving to Madrid in 2015 to study the flamenco guitar, singing, and percussion with renowned artists such as Montse Cortés and José Jiménez ‘El Viejín’. In 2018, Kati decided to create her own bridge between America and Europe with her project Flamenco Americana VIP EXPERIENCE - General Admission Ticket - Premiere seating - Intimate Performance - Pre-show cocktail hour - VIP Experience starts at 5:00PM, arrive 15-20 min early for check in!